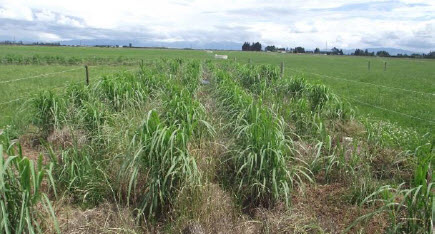 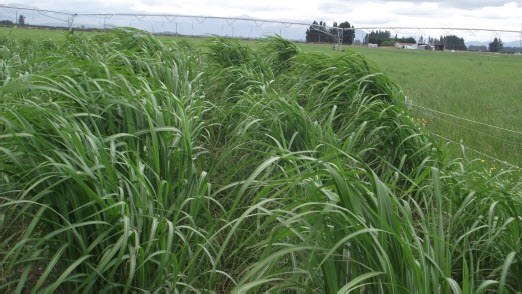 As anticipated in Newsletter 10, damage to the Centre Pivot at Aylesbury Farm caused problems with some early-season Miscanthus (Mxg) growth but fortunately severe damage has occurred only with the shelterbelt in paddock 22. Pivot repair was finally completed on December 8 but due to part of the pivot falling onto the Mxg shelter in paddock 22 many of the plants were driven over during repair (Fig. 2). Plants were severely affected as illustrated by the difference in growth between those in paddock 22 (Fig. 2) compared to those in paddock 21 (Fig.3). 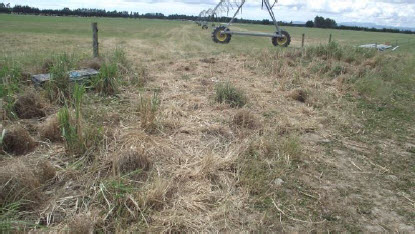 The lack of irrigation on Aylesbury Farm was compounded by the fact that spring was very dry with only 20 mm of rain falling in November and only 7 mm in the last half of October. Soil moisture levels had fallen below that necessary to maintain grass growth by the end of October, ranging from 6 to 15 % by volume (0v) at this time. Fig. 4 illustrates the soil moisture profile for paddock 22 and expected values for wilting point and field capacity. 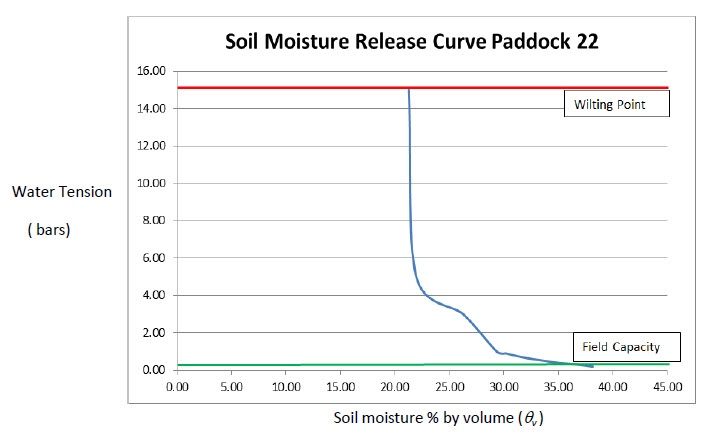 Soil water content held at low tension, present in macro and micropores, is readily available to the plants. Once the soil has reached field capacity any remaining water is held within micropores. As these pores are emptied, roots will draw from progressively smaller pores in which matric water potential is lower and the forces attracting water to soil surfaces, water tension, are greater. Therefore it will become more and more difficult for plants to remove water from the soil at a rate sufficient to meet their needs. At wilting point any soil moisture is held at too high a tension for the plants to extract and is unavailable to them. The soil moisture profile for paddock 22 shows that once soil moisture level falls below 22 % 0v any remaining moisture is unavailable to the plants. The soil becomes fully saturated at 36 % 0v and so the soil only holds 14 % 0v of available water. This, plus the fact that soil depth over most of the farm is between 24 and 35 cm and the farm often experiences dry windy conditions means the soil has low water storage ability and soon dries to wilting point in the absence of rain or irrigation. One of the potential benefits of the presence of Mxg shelterbelts will be to protect pasture plants from this drying wind and increase pasture production.

The fall in soil moisture levels meant some form of irrigation was needed and this was provided in part by establishing a network of K-lines across the farm. This allowed partial irrigation of parts of the farm which caused as well as solved problems for this research project. Paddock 21 miscanthus plants received 200 mm from K-line irrigation in November 2013 and consequently growth from this shelterbelt has been vigorous and uniform as illustrated by Figs.1 and 3. Most of the plants in this stand are now between 1.6 and 2 m tall. In contrast, paddock 6 picked up some moisture from irrigation on a neighbouring paddock on its northern boundary. The outer, northern row of plants grew relatively unhindered but other plants in the stand hardly grew at all (Fig. 5). 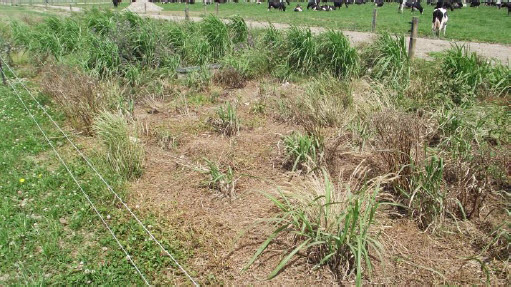 Mark Williams, Aylesbury Farm owner, kindly agreed to transfer some of his K-lines to irrigate the whole of the paddock 6 Mxg area for two days. This, as well as the subsequent pivot repair and high December rainfall has led to improved growth of previously water-stressed plants. Most are now between 1.1 and 1.5 m tall and plants across the shelter area now appear more even (Fig.6). 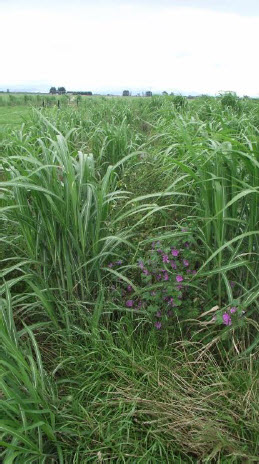 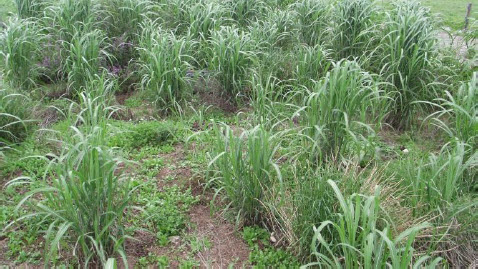 Paddock 22 has also now started to recover. During pivot repair it received no irrigation which resulted in the plants remaining dormant, which helped to minimise trampling damage from workmen and machines. All plants, even those that appeared dead, now have green shoots emerging and those that were not trampled have grown rapidly (Fig.7). 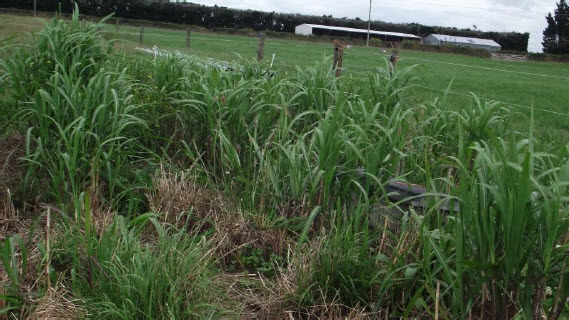 One of the consequences of installing K-lines only in certain areas of Aylesbury Farm is that resulting uneven grass growth will potentially mask any benefits of shelter effect on grass growth (Fig.8). Since drought effects were experienced only for one month, there should be no significant long-term effects in grass production. To check this, C-Dax pasture readings and dry matter cuts were taken at the end of the drought period and these will be used when analysing subsequent grass growth readings later in the season. 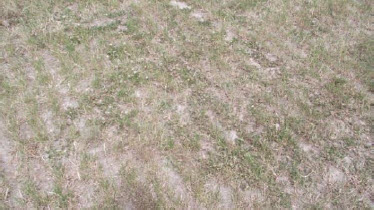 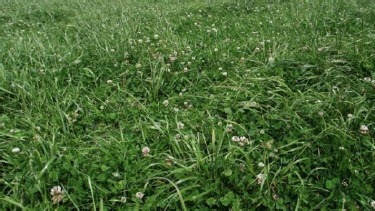 Effects of Mxg plantings on biodiversity

As stated in Newsletter 10, to give information on the extent of weed management necessary to allow unhindered crop growth, winter weed control in Mxg plantings on Aylesbury Farm involved only removal of weeds immediately surrounding Mxg plants and at Springston Farm there was no weed control. Removal of all weeds would be normal practice to maximise crop growth however establishing ground cover between Mxg plants can help to develop habitat beneficial for insects. The vigorous nature of Mxg growth, particularly year three onwards, eliminates the need for weed control after season two. Results here indicate that removal of weeds immediately surrounding Mxg plants is sufficient to allow unhindered crop growth in season two as illustrated by Fig.9.

Since Mxg grows vertically rather than laterally, an open canopy exists at ground level, particularly in young stands. In a narrow strip this allows light penetration and ground cover plants to grow. In two of the three new paddocks that were planted on the 16 December 2013, Acaena inermis ‘purpurea’ (Rosaceae) plants will be planted amongst the Mxg plants to provide nectar and pollen for beneficial insects and to determine if these plants will survive in this environment. 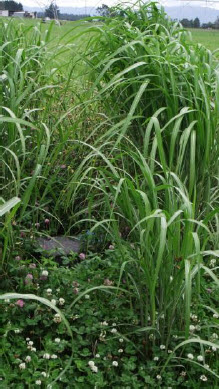 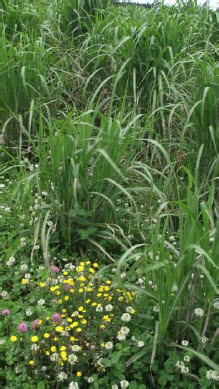 Bumble bee motels were restocked over the winter. In half of the compartments Pink Batts were used, the remaining half being stocked with a woollen blanket material. Previous research by Barron et al 2000 shows occupancy improves in season two and three after placement. Last season, no motels were used as nesting sites and this season only two out of 48 motels were occupied. Both compartments used contained Pink Batts, and both motels were in sheltered locations in paddock 6, one being in the Mxg shelterbelt and one in a thick gorse hedge. Hopefully next season an improvement in occupancy rate will be seen.

Skink refuge areas are starting to be used but only those placed within the Mxg. An intensive survey of occupancy rate will take place in March 2014.

Equipment to detect stomatal conductance in pasture plants and to monitor water-stress levels has arrived and is being calibrated for use in February 2014. The equipment will be set up on mobile trolley system and will be placed in the control and sheltered areas of paddock 21. The canopy temperature will then be used to directly indicate plant water stress levels in real-time and at the same time, soil moisture levels will be monitored. This work will provide information on whether water stress is reduced by shelter and also provide information on optimising irrigation efficiency.

The open day which was provisionally organised for February 20, 2014 at Aylesbury Farm has been delayed due to the irrigation problems. This will now take place in late March or April and when the date is confirmed notifications will be sent out. In the meantime, a team from DairyNZ will be visiting trial plots on January 27th and a new date will be set soon after this.

Thanks to those that have given their support to this project, in particular the funding from Westland Milk Products Ltd and DairyNZ, it is much appreciated. With the new plantings in December 2013 there are now six irrigated paddocks with shelterbelts in. This should enable sufficient data to be collected on the ecosystem benefits of using miscanthus as a shelterbelt crop on dairy farms. My 15 month report was completed and assessed favourably in November 2013 and a literature review is underway which will be submitted to relevant journals.